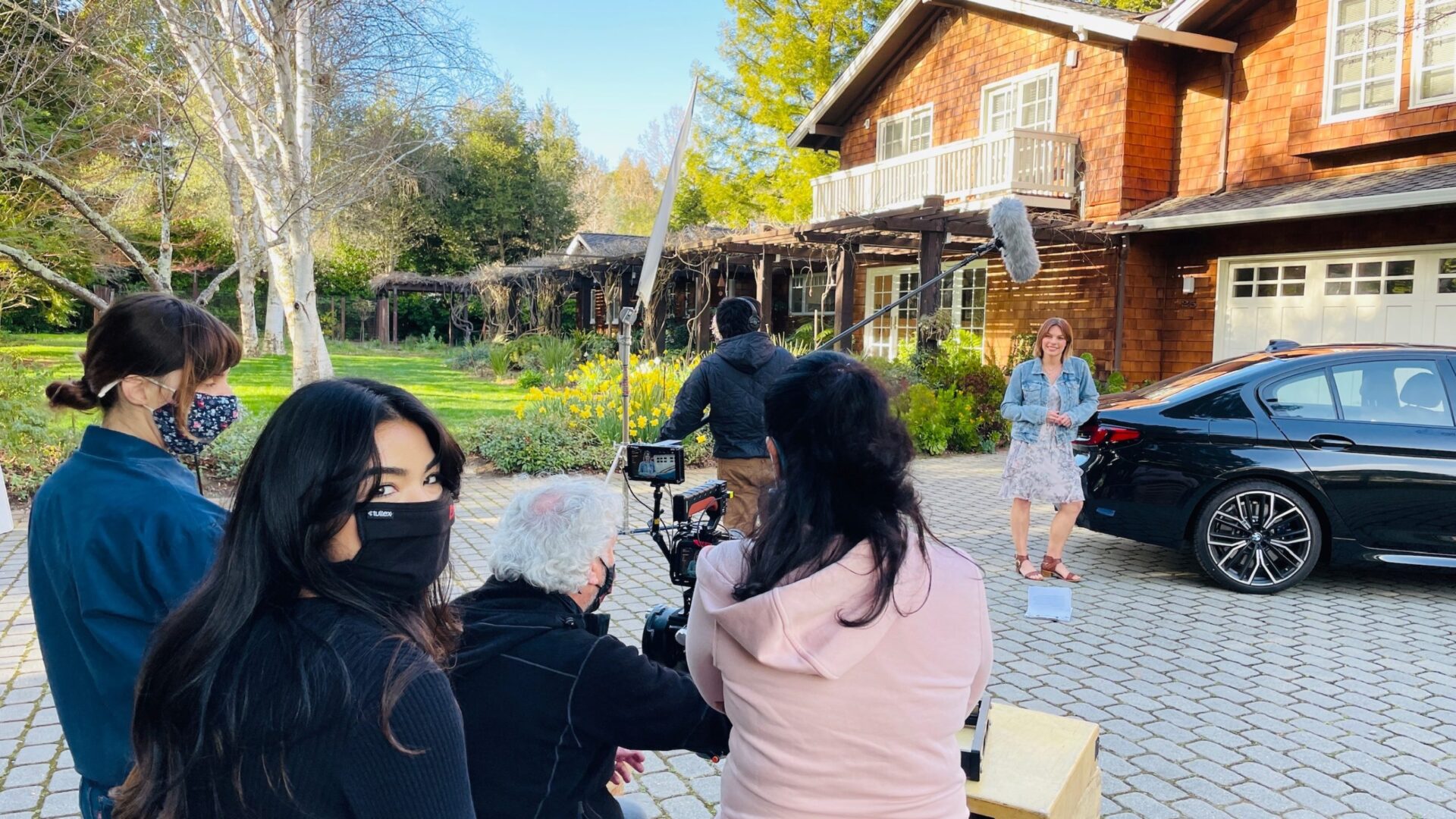 The Covid-19 pandemic has changed so much about our everyday lives. One thing that hasn’t changed is the need to forge on. Digital companies like Cover had the opportunity to become even more relevant since in-person business is a little trickier to conduct safely these days.

In this interview with Aarti Utwani, Cover’s Growth Marketing Manager, she shares how the Cover team worked through Covid and budget restrictions to come up with a great commercial idea, get it to production, and manage all the little details in between

Cover Blog: Cover recently produced, shot, and aired their first TV commercial! Congratulations on this big feat! Could you walk me through what the creative process was like prior to shooting (i.e., what was it like storyboarding, writing script, choosing which commercial scenario the team wanted to go with, etc.)?

Aarti Utwani: I think the most important step for any project is the first few brainstorming sessions and the ideas that we derive from them. We started by running a company-wide contest for brainstorming ideas for the TV commercial. We invited everyone in the company to participate and share their vision for the commercial. We didn’t give them any budget in mind because we wanted them to go wild and think outside the box. We had a few really great submissions that catalyzed our creative ideation process. The creative team and I finalized the concept by combining several proposed ideas. When we began looking at what we’d need to execute this idea, however, we realized that it may not be a production that is COVID friendly or fit our budget, so we ended up scrapping that idea and going with a simpler concept.

CB: How did you and your team plan for this shoot?

AU: Once we had our idea finalized, we started making a checklist of tasks to be completed and resources we’d need. Our first step was to find a DP (Director of Photography) to discuss our idea with and narrow down the location, actors, script, storyboarding, etc. We got in touch with a couple of creative agents in the industry and when we discussed our ideas with them, they referred 4-5 DPs from their roster. We contacted two of them and picked one. Our selection criteria included some points like the location of the Director (we didn’t want to fly someone in to keep costs down and avoid a quarantine period for our Director), experience, team, and camera equipment.

We really got lucky with Steve C., the Director we ultimately hired. He took care of all of the equipment and he had a fantastic two-woman team who operated lights and grip during the shoot.

Once we finalized the DP, we searched for a location where we could do all three scenes on the same day to avoid dragging the shoot out, and we had to make sure that the locations had enough room for social distancing. We booked our location for the shoot using Peerspace.com, which is like Airbnb for photoshoot/video shoot/other marketing locations. Booking through Peerspace meant that all the city permits were handled for us, which was a huge benefit.

To recruit actors for our commercial, we sourced through Instagram using hashtags like #SFactors, #BayAreaActors, etc. We had to keep in mind that many actors who are signed with agencies will have a short-term contract for content usage that comes with a steep price tag. We wanted to make sure that there were no such limitations. The content belongs to us so we can use it across different channels, not just for the commercial. We made doubly sure that was covered in our actor contracts. We started reaching out to these actors via IG and emails and did a virtual audition by giving them 3-4 lines from the script and have them record a selfie video to send to us. We had a total of 4 actors (3 professionals and 1 Cover team member, a sales agent named Cole).

CB: What was your favorite part of the planning process?

AU: My favorite part was working on the pre-production with our director, Steve. He was so informative and detailed. We discussed every minor detail of each shot, how would the actor look, how would he act, which angle would he be standing, how would he turn for this shot, where would he be looking, what if it rains on shoot day, how can we change the shot quickly and take it indoors. We were prepared for it all. We also did a location scout two days prior to the shoot where we storyboarded the entire commercial in 2 hours. I think the thrill and joy of being so well-prepared gave me an elevated level of peace; it’s like calm in chaos. There was nothing better than being mentally ready for the big “shoot day”.

CB: Did you encounter any obstacles during the shoot? How did you overcome them?

AU: We didn’t encounter any major obstacles during the shoot. We had a backup for everything that could go wrong. We were running 20 minutes behind schedule because our Cover team member who is in the commercial isn’t a professional actor and it took him a while to get comfortable in front of the camera and deliver lines, but we were prepared for it. We gave him the first early morning time slot so if things slowed down, we could quickly pick up the pace with the other 3 actors, and we did! Luckily, all of them did a fantastic job and we wrapped up the shoot exactly on time.

CB: Can you explain what it was like being on the set on shoot day?

AU: Honestly, it all went pretty smoothly. Since it was shot during the pandemic, we had a very limited team on set. Here’s a breakdown of people on set: Director with 2 helpers for light and grip equipment, Producer – I was the producer and I did mostly all of the coordination plus makeup, hair, and costumes for the actors, an Assistant Producer to help actors with lines, shots, coordination on the day of the shoot, two Cover employee volunteers, Tommy and Ben, who helped on location with miscellaneous work like moving the car, food, behind the scenes, etc., the sound team had two members, then our 4 actors, but with only one actor present at a time since they were given time slots to avoid having too many people on set at a time.

We had to take extra care on set to keep everyone safe during the pandemic. Team members had to take PCR tests for Covid-19 48-hours and 24-hours before. Everyone wore masks all day except the actors when they were on camera when everyone would be able to stay 15-20 feet from them. We didn’t have food catered to avoid sharing any germs over food. Instead, everyone had individually packed meals.

As mentioned earlier, our pre-planning was so detailed that the shoot went by smoothly. It was great to work with a diverse team and so many women! I loved that the ratio of men and women in our team was equal. Everyone was great at their tasks and they gave 100% in whatever they were doing. They worked ‘til the very last minute to get the perfect shot and didn’t mind the retakes.

CB: What was your favorite moment on set?

AU: One of my favorite moments happened after the shoot. I was budgeting and the total spent was lower than the budget allocated. That was so satisfying. Other moments were practicing lines with the actors. Even though insurance can be a really complicated topic, they all were trying and giving their best for the shot. Also, we definitely lucked out with the weather – it was not too hot, not too cold. It was one of the gorgeous days of San Francisco weather and it just made every moment on the shoot so much more enjoyable.

CB: Were there any memorable moments and/or bloopers caught on camera?

AU: Cole’s delivery of his script was great. We had a plane fly overhead during one shot and had to cut. We also had the property owner’s dog running around the set and standing next to the actor, posing and ready for the camera. He started barking when we said cut. It was so cute, he wanted to get featured!

CB: What was your biggest takeaway/lesson learned during the planning, shooting, and directing of the TV commercial?

AU: There is so much information out there, make sure you do your pre-production planning very well and the rest will follow. Make sure you have a budget and an idea and make sure they are in sync – you can’t create a 3-hour movie on a $15K budget. List how many shots you want to have, brainstorm ways that you can lower your costs while not compromising quality, hire multi-talented team members, be picky, be detailed. If you think something won’t work, voice that and let the team know. You are a Creative Director; your opinion matters on the set. If you’re doing this for the first time, don’t be afraid. You will learn and you will figure it out.

One of the biggest lessons I learned was at the beginning of the process – every time I would reach out to prospective DP’s, the team would tell me that our budget was too low and they couldn’t shoot the commercial. For a project like this, they told us that they needed at least a 20-person team, a producer, and on and on. Don’t be demotivated, don’t give up. If you have a vision and if you think it is possible, find a way to make it possible. Start breaking the project down into steps, and while you are at it you will realize what you’re missing and what you still have to learn. In the end, I do want to say that we didn’t hire any other company/producer. We only outsourced a director who understood our concept and had the ability and tools to shoot it. We listed all the things we would need for the shoot and started crossing things off the list one by one. It’s a slow process with lots of back and forth, but in the end, it’s all worth it. Don’t let anyone tell you that it is not possible!

CB: What advice would you give to aspiring Marketing Directors, Videographers, and Creative Directors?